The Federal Advisory Board

The purpose of the Thinklogical Federal Advisory Board is to foster solution innovation while deepening the company’s relationship with government, military, intelligence and homeland security customers. The caliber of military and civilian leadership who have been drawn together to form The Board is clear validation of the important role that Thinklogical plays in the global defense, intelligence and security communities.

Arthur L. Money was named Assistant Secretary of Defense for Command, Control, Communications and Intelligence [ASD (C3I)] in 1999 and maintained that post until 2001. Prior to that, he served as the Senior Civilian Official, Office of the ASD (C3I). Simultaneously, he served as the Department of Defense (DoD) Chief Information Officer (CIO) from February 1998 to April 2001. He has also served as Assistant Secretary of the Air Force for Research, Development and Acquisition and as CIO for the Air Force; Vice President and Deputy General Manager for the TRW Avionics and Surveillance Group; and as President of ESL Inc., a subsidiary of TRW. A former member of the Defense Science Board and Chair of the FBI Science & Technology Advisory Board, Mr. Money currently serves as the Chairman of the Outside Advisory Board for the NSA and the FBI.

Admiral Howard was previously the 38th Vice Chief of Naval Operations. Howard graduated from the United States Naval Academy in 1982 and from the Army’s Command and General Staff College in 1998, with a master’s in military arts and sciences. Howard’s initial sea tours were aboard USS Hunley (AS 31) and USS Lexington (AVT 16). While serving aboard Lexington, she received the secretary of the Navy/Navy League Captain Winifred Collins award in May 1987. This award is given to one woman officer a year for outstanding leadership. She took command of USS Rushmore (LSD 47) March 12, 1999, becoming the first African American woman to command a ship in the U.S. Navy. In 2009, she deployed to U.S. Central Command theater, where she commanded Task Force 151, Multi-national Counter-piracy effort, and Task Force 51, Expeditionary Forces. In 2010, she was the Maritime Task Force commander for Baltic Operations, under U.S. 6th Fleet.

In addition to being a current advisory official at the NGA, Peter Marino serves as chairman of the board of directors for TASC Group, a major provider of government engineering architectures and solutions. He has been a consultant to both government and private industries regarding defense and intelligence issues, working for prestigious clients such as the Department of Defense, the Department Homeland Security, Raytheon, Boeing, the National Reconnaissance Office, and the Director of National Intelligence. Marino was a member of the Defense Science Board and the Intelligence Science Board, has held executive positions with Lockheed Martin Corporation and Fairchild Industries, and has served in numerous positions with the CIA dating back to 1970. He has been granted both a Distinguished Intelligence Medal and the Director of Central Intelligence Award for Exceptional Service and is a senior executive fellow at Harvard University.

Gen. Schwartz served as the 19th Chief of Staff of the U.S. Air Force and retired from military service in 2012. Schwartz graduated from the U.S. Air Force Academy in 1973. He is an alumnus of the National War College, a member of the Council on Foreign Relations, and a 1994 Fellow of Massachusetts Institute of Technology’s Seminar XXI. He has served as Commander of the Special Operations Command-Pacific, as well as Alaskan Command, Alaskan North American Aerospace Defense Command Region, and the 11th Air Force. Prior to assuming the position of Chief of Staff, Schwartz was Commander, U.S. Transportation Command and served as the single manager for global air, land and sea transportation for the Department of Defense. As Chief of Staff, Schwartz served as the senior uniformed Air Force officer responsible for the organization, training and equipping of 680,000 active-duty, Guard, Reserve and civilian forces serving in the United States and overseas. As a member of the Joint Chiefs of Staff, Schwartz and the other service chiefs functioned as military advisers to the Secretary of Defense, National Security Council and the President. He is currently President and CEO of BENS – Business Executives for National Security.

U.S. Army Gen. Walter L. “Skip” Sharp is the former commander of the ROK/U.S. Combined Forces, the U.S. forces, and the U.N. forces in Korea. He graduated from West Point in 1974 and was commissioned an Armor officer. Sharp earned a Master of Science degree in Operations Research and System Analysis from Rensselaer Polytechnic Institute; and is a graduate of the Armor Basic Course, the Field Artillery Advanced Course, the Command and General Staff College, and the Army War College. He has had four assignments at the Pentagon on the Joint Staff. He was the Deputy Director, J5 for Western Hemisphere/Global Transnational Issues; the Vice Director, J8 for Force Structure, Resources, and Assessment; the Director for Strategic Plans and Policy, J5; and the Director of the Joint Staff. Sharp commanded troops in Desert Shield and Desert Storm, Operation Uphold Democracy in Haiti, and SFOR’s Multinational Division (North) in Bosnia. Sharp retired from the United States Army as a four-star general in September 2011, last serving as Commanding General, United Nations Command, Combined Forces Command, U.S. Forces Korea (UNC/CFC/USK) from 2008 to 2011. 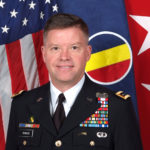 General David G. Perkins served as Commander, United States Army Training and Doctrine Command after serving as Commander, United States Army Combined Arms Center, Fort Leavenworth, Kansas, where he was the lead for synchronizing leader development across the Army, the management of the Army’s training support and training development enterprises, and the development and integration of the doctrine the Army uses to fight and win our Nation’s wars.

Previously, Gen. Perkins served as the Commanding General of the 4th Infantry Division (Mechanized). Gen. Perkins also served as the Brigade Commander for the 2nd Brigade, 3rd Infantry Division (Mechanized) during the invasion of Iraq, commanding the unit’s “Thunder Run” into Baghdad and subsequent stability operations in support of Operation Iraqi Freedom, where he earned the Silver Star, the nation’s third highest award for valor. Gen. Perkins was commissioned into the Armor Branch upon graduation from the United States Military Academy at West Point in 1980.